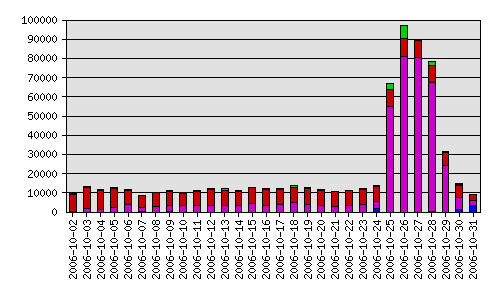 Just in case you’ve been keeping track, this is the seventh time a Spammer has forged one of the domains under my control as the return address of their Spam run. The first time it happened I felt shocked, angered, and betrayed. After I lost count of the incidents on my left hand and had to move on to my right hand to keep track it now just feels old-hat. Sure, it still pisses me off, but I now just chalk it up to being the owner of many high profile domain names.

Previously I noticed Spam runs immediately because the mail server started choking on the influx of bounces. This time the domain in question had a Barracuda Spam Firewall 200 sitting on the front lines in the DMZ; I didn’t notice the barrage until the midnight reports ran and I received the pretty pie charts showing a 600% increase in e-mail (and that was just the first day).

Days 2 and 3 jumped up to a 800% to 900% increase in e-mail before starting to plateau and drop off on Day 4. All in all around 350,000 bounces were blocked which is pretty routine for a forged run but the Barracuda performed without so much as a hiccup.

And, for the more visual among you, I’ve of course attached the obligatory pretty graph to show what a Spam forgery looks like. Green is legitimate e-mail, red is blocked Spam, magenta is bad recipient, and blue is rate control (too many connections).

Finally, someone reveals all the secrets of viral marketing in one single easy-to-read step!

The Litterbox, one of my first domains, used to be a Web site dedicated to domestic pet rescue and care. After a few years of operation quite a few other sites like Petfinder.com popped up that did a much better job of what my wife Kelly and I were trying to accomplish as a hobby in our spare time. So we emptied The Litterbox six or seven years ago and it had been sitting collecting dust since then.

But what good is an empty litterbox? Litterboxes should be full! So a few days ago I filled The Litterbox back up with what else but cat pee. Enjoy.

naymz, a new online identity service, claims to allow you to control your online identity. The premise is that search engines may still be linking to incorrect, outdated, or embarrassing data. naymz allows you to create a profile that is “guaranteed” to be at the top of search engine results to help prospective employers and dates find the “real you” and to reconnect with old friends.