We have a garage band next door. They practice 8 hours a day. They’re not that bad but the singer sucks. The singer was attempting some new song that requires constant yelling into the microphone instead of singing. Apparently, someone complained because the police just showed up, screamed at the guys through their window for an extended period of time and then left. We haven’t heard any music since… A few weeks ago I started seeing commercials for the Playtex Thank Goodness it Fits line of bras. My initial reaction to the ad campaign was that of the typical caveman…boobies. Now, a few weeks later, I’ve noticed that the ads are being almost politically correct. Instead of A and a half it’s almost B. Almost C instead of B and a half.

I guess actually using half in the product name would imply that the customer’s breasts are too small. Now, instead, Playtex is implying that the customer’s breasts are almost good enough. Oh well, no worries, I don’t require a man bra for my breasticles so I’m not directly effected by the ad campaign. Perhaps a female (Kelly? Debbie?) could give me a better opinion on the subject?

Also, in my quest for the eye candy to attach to this post, I discovered that Playtex is owned by Sara Lee. I’d dive into a long-winded rant about a pastry company using incredibly sexy unobtanium to promote their lingerie but, instead, I’ll simply ask the obvious question. Where are the edible undies?

With the exception of the quarter round trim and a few touchups in the paint, the hedgehog room is ready to start housing inhabitants! Brian helped out with the linoleum and we managed to trim the whole floor without a template because the roll was pre-cut to size. Creative use of trim and thresholds will cover the rough edges.

We’re still looking into shelving and storage solutions to stack the inmates guests and then we’ll be ready for licensing!

The BBC radio show has been floating around the Net for quite a while now…I’ve been listening to it all morning.

Wow++. Wired linked to me. That makes me happy in pants.

Article: Turn Back the Spam of Time
By: Brian McWilliams 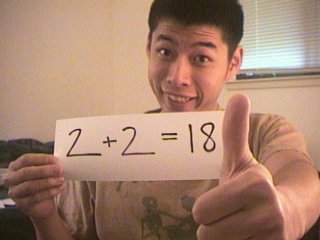 Asteroid 18610 was discovered by Felix Hormuth. A longtime fan of Douglas Adams, it was confirmed on May 09, 2001 that he was to name Asteroid 18610 Arthurdent after the hero and protagonist of The Hitchhiker’s Guide to the Galaxy.

Science Fiction writer Douglas Adams, author of The Hitchhiker’s Guide to the Galaxy and its sequels, died of a heart attack on May 11 at the age of 49. Only two days before his death, approval was given to name asteroid 18610 Arthurdent after the hero of the series. Apparently word of this did not reach Mr. Adams before his death. The name was proposed by the discoverer, Felix Hormuth, who discovered it in February, and hopefully Mr. Adams did know of the proposal.

I’ve started looking into search engines for indexing large amounts of data. Although the primary reason for this is to start organizing my personal data collection, it will also come in extremely handy on the file servers at work. I’ve started to reach critical mass when it comes to the amount of random garbage I have floating around on miscellaneous file servers and I now need a much better indexing scheme.
END_OF_DOCUMENT_TOKEN_TO_BE_REPLACED