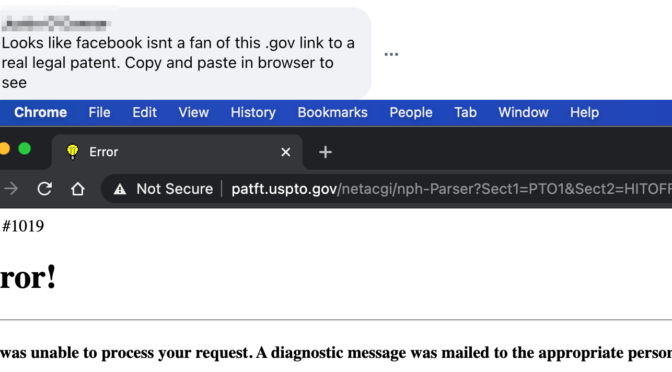 An acquaintance on Facebook was sharing some interesting information about the US Army’s Analysis and Assessment of Gateway Process. It was a fun read, and a few sections paralleled Maat Magik’s take on astral projection, and the binaural meditation tapes that my late father, who was an instructor for Dale Carnegie, had me listen to as a kid.

But one of the resources that they posted was a link to the United States Trademark and Patent Office…which promptly threw an error when clicking through from Facebook. Because of the error, they mused, “Looks like facebook isnt a fan of this .gov link to a real legal patent. Copy and paste in browser to see.”

This piqued my curiosity, so I inspected the URL:

My assumption was that Facebook was munging the URL somehow, so I replaced the instances of the URL-encoded hexadecimal “%2F” with a normal “/”:

Still no dice, and the website still threw an error. So I removed “&fbclid=REDACTED” from the end of the URL, and deep linking to the patent worked just fine.

Just for the heck of it, I added “&test=test” to the URL, and it promptly threw the error again. So USPTO is erring on the side of caution by sanitizing and rejecting all unexpected input. But, based on my completely unscientific study of a single individual, that strict error handling is possibly resulting in public mistrust, where folks may assume that either Facebook or USPTO is censoring content.

So I’ve put on my tinfoil hat, and I’ve reached out USPTO’s Electronic Business Center to report the issue. I’ve also let my acquaintance know that there was no greater conspiracy theory, and that the error was due to strict handling on USPTO’s side, and received a coveted like from them.

Nothing to see here, please move along…